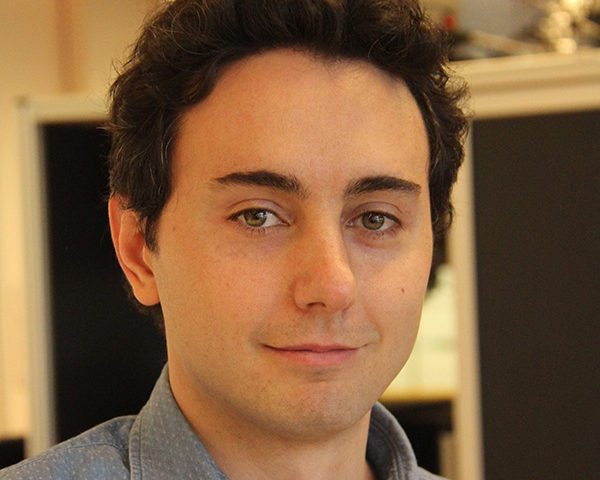 At 1 November, ARC CBBC’s first postdoctoral researcher started in a bilateral project of BASF and Utrecht University. Matteo Monai is an expert on heterogeneous catalysis in topics related to energy and the environment. Within ARC CBBC, he wishes to contribute to the possibility of converting greenhouse gases into energy-rich fuels. ‘It is all about the size, geometry and electronic structure of the catalyst active sites.’

Matteo Monai gained his PhD at the University of Trieste, Italy. His field of interest at that time was catalytic oxidation to convert exhaust gases generated by cars. ‘In natural gas-powered vehicles, when you start the engine or are driving slowly, some unburned natural gas is emitted through the exhaust. Natural gas is mainly composed of methane, a greenhouse gas with a climate forcing potential of about twenty times as much as carbon dioxide. So you really don’t want to release methane into the air. During my PhD research, I explored the conversion of this methane stream into carbon dioxide to mitigate the environmental damage of exhaust gases.’

‘Within my current position at ARC CBBC, the reaction is just the opposite: I try to convert carbon dioxide into methane. We call this process methanation. If we can then use this methane as a fuel, we will gain a lot. Because we will then have produced valuable products from something that used to be considered as waste.’

‘To be able to optimize the methanation reaction, we need to understand the material that catalyzes it. Nickel is a well-known methanation catalyst, but we want to study how the size of the metal nanoparticles and the nature of the support influence the catalytic performance. We are trying to understand how to gain activity and selectivity by understanding the reaction pathways involved.’

Receptive to the catalyst

The active phase of a catalyst should have a high area in order to get a larger fraction of atoms in contact with reactants in the gas phase. However, at a certain threshold down at the nanometer scale, further downsizing the catalyst works counterproductive. Monai explains: ‘At that point, so- called structure sensitivity can be observed. You can run short of catalytic active sites, which promote a certain reaction, but then also gain selectivity in another. In our case we are looking for the sweet spot to hydrogenate carbon dioxide and the intermediate carbon monoxide.’

The size of Ni nanoparticles has a strong influence on the reaction pathway and on the stability and nature of the reaction intermediates adsorbed on the surface.

‘To make it even more complicated, the electronic structure of nickel changes due to quantum effects at the nanometric and sub-nanometric scale and the interaction with the support. That is also something we are looking at. Can we tune the selectivity of nickel towards the production of other hydrocarbons too? Optimizing a catalyst is very complicated. It is about the size, geometry and electronic structure of the catalyst.’

Matteo Monai has got experience in cooperating with industries. ‘Within my PhD, I worked on projects with companies, like a car manufacturer and an energy supplier. Nevertheless, my research was very fundamental in nature. The reactions that we catalyzed could be applied to more than one product. I see that in the work of ARC CBBC as well and find it very exciting.’