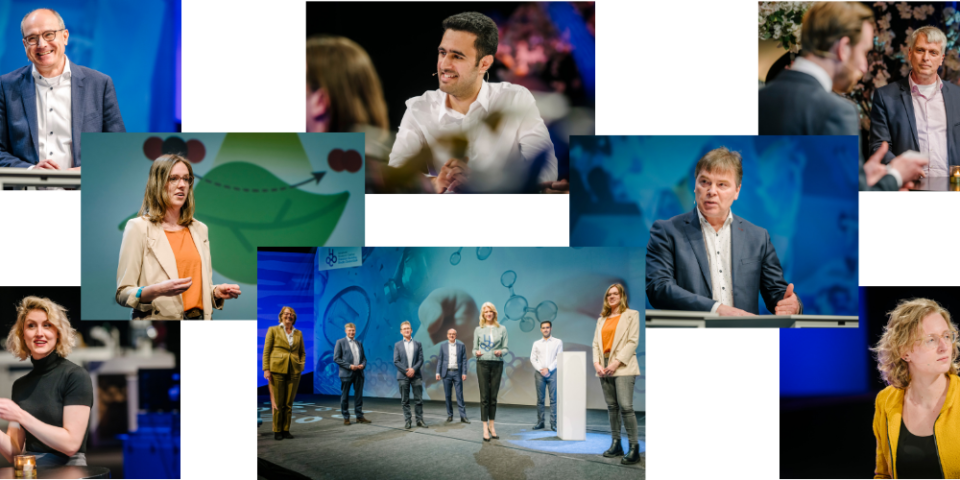 On the occasion of its fifth anniversary, the Advanced Research Center Chemical Building Blocks Consortium (ARC CBBC) held a live-streamed symposium to show what it has accomplished and the further progress that it sees ahead.

Under the banner “Reinventing Chemistry Together”, the symposium was set up much like a live broadcast from a TV studio, with a charismatic master of ceremonies (MC) who invited several guest speakers from industry, government and academia to make presentations or participate in group discussions that he himself moderated. The discussions were often prompted by questions that viewers submitted while watching. Instead of commercials, short pre-recorded videos  (see Appendix) provided intermissions between the “live” segments.

The MC/moderator, Joost Hoebink, kicked off the event, explaining how the symposium program would run. He then asked Bert Weckhuysen, Scientific Director of ARC CBBC, and Ben Feringa, Chair of the Executive Board of ARC CBBC, to set the context for all the ensuing discussion by asking them to give a personal account of how and why the consortium came to be. [0:16:55—0:28:30]

Bert began by telling a story from more than five years ago: “We were sitting after a tiring meeting…drinking beer on a Friday night when we said: We should not talk about; we should just do it.” And by “it”, Ben explained, they meant “the future of chemistry: how are we going to make our products 30-40 years from now?”

Moving to a table setting, Joost had a discussion about the importance of collaboration in innovation with Dirk Smit, Shell’s Vice President Research Strategy and Chief Scientist, Klaas Kruithof, AkzoNobel’s Chief Technology Officer and—joining virtually—Jörg Unger, BASF’s Senior Vice President Corporate Technology & Operational Excellence. Even businesses in the capital-intensive chemical industry recognize that their operations will have to change quickly to fit better in a greener and more circular economy. This requires knowledgeable people, which are often found in academia, to come up with ideas from that can be developed into workable solutions. [0:28:58—0:49:05]

“You need an environment where bright minds, say, those becoming a PhD or starting to study science…can develop a line of sight to a deployment [in the private sector]. And that’s unique to the CBBC.”, according to Dirk.

The technical aspects of sustainable chemistry were also briefly touched upon in this first part of the symposium through stand-up conversations that Joost had with pairs representing the CBBC: a PhD candidate just starting a career and an industry scientist in full prime. They provided a preview of the somewhat deeper technical discussions that would take place in the second part of the symposium.

“My dream”, revealed Lotte, “is that we can design and tailor these catalysts, so we can improve the world on a macroscale by controlling it on the nanoscale.”

Jan Peter Balkenende, Chairman of the Dutch Sustainable Growth Coalition and of the Major Alliance, then took the stage to go back to the topic of collaboration—but focusing on the government policies that incentivizes sustainable business models. [0:59:45—1:12:51]

“How can Europe reposition—reinvent—itself?… I think the whole concept of climate change and the circular economy should be part of it. The chemical industry can play a huge role”, said Jan Peter.

In a second stand-up conversation Sander van Bavel, Program Lead Methane-to-Products at Shell and Morteza Hadian, a PhD candidate at Eindhoven University of Technology, spoke about the possibility of using methane as a chemical feedstock to make durable carbon products rather than as a fuel that is burned, releasing carbon dioxide in the process. [1:16:10—1:22:41]

“The carbon has a great potential for many industries: one of them is [structural materials] for buildings and vehicles…I would like to be a piece of the puzzle that moves this process one step forward,” explained Morteza.

The discussion then returned to a more abstract level to consider the close relationship between industry and academia in R&D programmes in Europe. Frank Heemskerk, Secretary General at European Round Table for Industry, represented industry and Matthias Beller, Director Leibniz-Institut für Katalyse and Chair of the Scientific Advisory Board of ARC CBBC, represented academia. They agreed that the chemical industry has to shake off its antiquated image of being dirty and CO2-emitting and whole-heartedly invest in the people, digitalisation and R&D for clean and green processes. [1:24:57—1:40:05]

The last stand-up conversation then took place with André van Linden, AkzoNobel’s Director of Coatings Technology and Sarina Maβman, a PhD candidate at the University of Groningen. They talked about how coatings could be given unheard-of “functionality”—for example, the capability to clean themselves of stains or to rid themselves of scratches—thanks to new chemical and materials research. [1:43:58—1:51:20]

After having just gone through the experience of painting the kitchen of her new home, Sarina confessed: “I hope that the next time I have to paint my kitchen, I can take a bio-based paint that is not smelly and is water-based and that I don’t have to apply another time!”

The goal of the ARC CBBC was neatly described in a discussion with Mona Keijzer, State Secretary for Economic Affairs and Climate Policy, and Marjan Oudeman, Chair of the Supervisory Board of ARC CBBC. They advocated getting public and private institutions to go for moonshot-type “missions” in key industrial sectors, such as energy, agriculture and healthcare. [1:52:08—2:00:10]

“Several agreements [have been reached] between government, companies, knowledge institutions and social organizations. We already have hundreds of new research and innovation projects…We’re really getting somewhere”, Mona pointed out. “It’s all about working together…cooperation between all kinds of engineers, all kinds of scientists, all kinds of government officials to get somewhere. And [the ARC CBBC] is a perfect example of it.”

The ARC CBBC offered to take up this mission on behalf of the chemical industry. And, as a token of this, it presented Mona with a table-top glass sculpture of the consortium’s logo. (The awkwardness of the handover—and the fact that it had to be repeated for a photographer—underscored that the event was indeed being broadcast live with anti-COVID precautions.)

At this point, the symposium shifted gears to let PhD candidates and industrial scientists seated around a table talk about the research taking place at the ARC CBBC laboratory hubs. The discourse, by its very nature, was conducted at a more technical level, but the enthusiasm and expectations for the future could not be suppressed.

Ben Feringa set the scene for the first of these “table talks” on the subject of green transformations and materials:  how alternative solvents and building blocks can create climate-friendly, sustainable and responsive materials from which to make our everyday products. [2:33:00—2:49:25]

George Hermens, PhD candidate at the University of Groningen, then gave a “high-speed lecture” about the subject so that the virtual audience could better appreciate the key concepts raised by the table-talk participants [2:52:53—3:14:32]:

Bert Weckhuysen put the next table talk into context by explaining how various kinds of electromagnetic radiation were being used not only to probe the characteristics of heterogeneous catalysts but also to stimulate the catalytic process itself. Such photo-catalysed chemistry would make a more sustainable and circular economy possible. [3:15:13—3:19:20]

Eline Hutter, Assistant Professor, and Mirjam de Graaf, PhD candidate, both at Utrecht University, then teamed up to deliver a high-speed lecture to bring everyone up to speed, entertaining not only the live-stream viewers but also the table-talk participants [3:23:16—3:45:20]:

The last table talk considered the topic of how to bring a catalyst discovery in the lab to an operational chemical plant, where it can have true impact. This time, Hans Kuipers, Program Director Energy Carriers, ARC CBBC, framed the general discussion [3:45:52—3:50:52]. And Nikolay Kosinov, Assistant Professor, Eindhoven University of Technology, gave the high-speed lecture that preceded the table talk, whose participants were [3:55:05—4:16:01]:

The symposium was closed by Bert and Ben, who said that they were both greatly energized by the enthusiasm that the physically present participants had just released after being pent-up for months and months of COVID-19 distancing. They were absolutely convinced that the ARC CBBC will have significant beneficial impact on the chemical industry of the Netherlands and, ultimately, the world. [4:17:02—4:23:48]