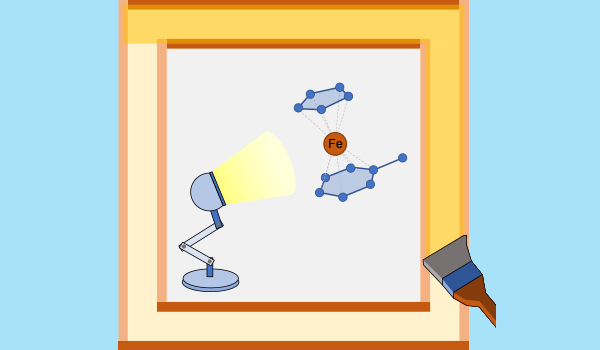 Alkyd paint is a popular type of paint. During the drying of the paint (or ‘curing,’ as chemists call it), the liquid paint undergoes a process in which a cross-linked network is formed, resulting in a dry (or ‘cured’) coating. Alkyd paints typically contain several ingredients to control their (physical) properties and appearance, such as binders, pigments, fillers and diluents, as well as components to regulate the flow and curing of the paint.

To control the drying time of alkyd paints typically two components are added: component one fastens the curing process and is referred to as a catalyst, while component two blocks the catalyst from becoming active during storage. The latter is often a volatile compounds, which evaporates during application of the paint, allowing the catalyst to become active. To meet the increasing awareness of producing sustainable products, it is important to re-evaluate the chemical composition of alkyd paints.

In most alkyd paints the catalyst is based on cobalt. Whereas catalysts based on the more abundant metals manganese and iron exist, the cured coatings typically cannot reach the same hardness levels as with cobalt catalyst (in the case of manganese), or curing can occur already during storage (in the case of iron). In the PhD project of Johan Bootsma, performed at the University of Amsterdam under the supervision of prof. Bas de Bruin, a different approach has been investigated in managing the challenge of balancing storage stability and curing activity.

Put simply, it relies on the catalyst only becoming active in the light. As it is dark in a closed can, the catalyst will stay dormant during storage. The drying times of paints dosed with these light-activated iron-based catalysts were just as good as those dosed with a cobalt-based catalyst, without having to add a second component to prevent curing during storage. Moreover, the paints containing the iron catalyst showed promising results regarding the hardness of the cured coatings. Furthermore, the new catalysts did not seem to influence the colour too much.

Altogether, paints containing iron-based catalysts instead of cobalt-based ones show promising results. In the future, the group in which Johan is active will continue this work in exploring the possibilities for sustainable curing of alkyd paints.