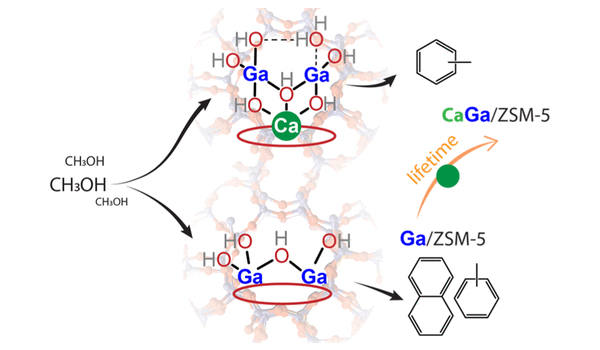 The production of valuable aromatics and the rapid catalyst deactivation due to coking are intimately related in the zeolite-catalyzed aromatization reactions. Here, we demonstrate that these two processes can be decoupled by promoting the Ga/HZSM-5 aromatization catalyst with Ca. The resulting bimetallic catalysts combine high selectivity to light aromatics with extended catalyst lifetime in the methanol-to-aromatics process. Evaluation of the catalytic performance combined with detailed catalyst characterization suggests that the added Ca interacts with the Ga-LAS, with a strong effect on the aromatization processes. A genetic algorithm approach complemented by ab initio thermodynamic analysis is used to elucidate the possible structures of bimetallic extraframework species formed under reaction conditions. The promotion effect of minute amounts of Ca is attributed to the stabilization of the intra-zeolite extraframework gallium oxide clusters with moderated dehydrogenation activity.