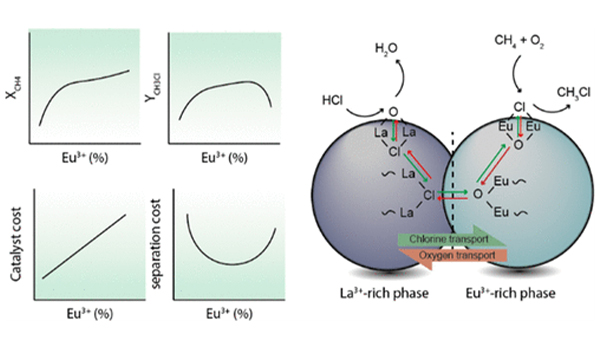 ARC CBBC PhD-candidate Bas Terlingen from Utrecht University recently published his work in scientific journal ACS Catalysis. But what was this publication all about?

In general, Bas’ research is focused on recycling HCl. HCl is a by-product in many industrial chemical processes, and is often seen as waste. What if we can use this by-product as feedstock for the production of useful chemical building blocks? Bas already explained the vision of recycling HCl in a video.

To facilitate and speed up the conversion of HCl to these useful chemical building blocks, catalysts are used. These catalysts help the reaction without being depleted themselves. This is where Bas’ research comes in. He collaborated with his industrial partner Nobian, and his goal is to improve the catalysts to make them more effective and efficient, and therefore bring recycling of HCl closer to commercial application in the chemical industry.

This specific publication concerned the so-called EuOCl catalyst. This catalyst already shows promising results, but it could still be improved. Bas tried to improve the EuOCl catalyst by replacing a part of the metal component of the catalyst, europium, with a different metal, lanthanum. This could, for example, make the catalyst cheaper and more suitable for recycling HCl.

Bas found that instead of only using europium, combining it with lanthanum indeed gives positive results. The catalyst becomes more suitable for the conversion of HCl, and it also reduces the formation of by-products in the reaction. The symbiosis between the two metals makes this new catalyst more interesting for commercial applications, bringing us one step closer to more sustainable chemistry.