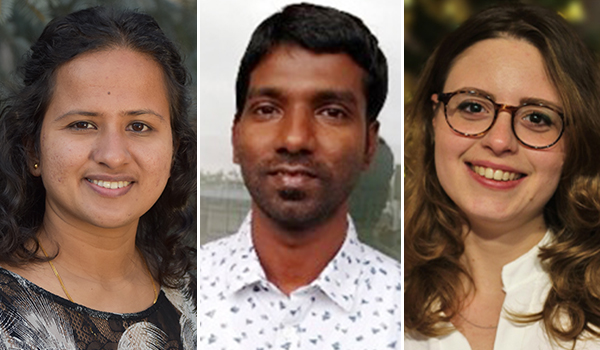 Sreenithya Avadakkam grew up in Kerala, a southern state in India. She received her master’s in chemistry from the Cochin University of Technology in 2011. She carried out her doctoral work at the Indian Institute of Technology Bombay under the supervision of Prof. Raghavan B. Sunoj where she received her PhD in 2019. She then worked as a postdoctoral researcher at the Colorado State University with Prof. Robert S. Paton (2019-2011). She joined as a postdoctoral researcher at the Delft University of Technology with Prof. Evgeny Pidko in June 2022. Her research interests are in the area of computational chemistry focusing on understanding catalytic reaction mechanisms and designing new catalysts by applying quantum mechanical calculations and statistical modeling.

Kaniraj Jeya Prathap was born in 1984, in Kanyakumari, India. He completed his PhD at CSMCRI in 2012 (India) with Prof. R. I. Kureshy on the synthesis of pharmaceutically active chiral β-amino alcohols (Asymmetric catalysis).

His postdoc began with Prof. Detlef Schroder at IOCB, Prague, Czech Republic (2012) on the catalysis and studying the reaction mechanism via ESI-MS (Mass spectrometry). After this, he worked as a Lady Davis and PBC postdoctoral fellow at TECHNION- Israel Institute of technology, in Israel (2012-2015) with Prof. Galiya Mayyan, developing the novel peptidomimetic material (Biomimetic chemistry). He then moved to the KTH-Royal Institute of Technology, Sweden as a Wenner-Gren Postdoctoral fellow (2016-2018) to develop the Nano cellulose based (Nano- chemistry) catalytic system in water with Prof. Peter Diner. Later, in 2019, he moved to Wageningen university (NL) as a research fellow with Prof. Joris Sperkel and Prof. Bauke Albeda, developing a new mechanoresponsive soft polymer (Mechano chemistry), before joining the Minnaard Lab in 2021.

After obtaining her master’s degree in physical chemistry from La Sapienza University of Rome (2017), she joined the group of prof. dr. Bruno Ehrler at AMOLF (2018), where she investigated the effects of strain and structural modifications on the optoelectronic properties of halide perovskites. During her PhD research, she established several national collaborations within the Netherlands and international collaborations (Europe and USA) expanding her knowledge on perovskite-based materials and spectroscopy. After obtaining her PhD (2022), she joined the Department of Inorganic Chemistry and Catalysis at Utrecht University led by prof. dr. ir Bert Weckhuysen. Here, she works as postdoctoral fellow in the group of Dr. Eline Hutter to design novel functional materials that combine the excellent optoelectronic properties of double halide perovskites with organic molecules for applications in catalysis and photocatalysis.