Paradigm Shifts in the Theory of Chemical Bonding and Reactivity

Matthias Bickelhaupt holds Chairs in Theoretical Chemistry at Vrije Universiteit (VU) Amsterdam and Radboud University Nijmegen, is Head of the VU Department of Chemistry & Pharmaceutical Sciences, and Chairman of the Holland Research School of Molecular Chemistry.

After obtaining his Ph.D. with Nico Nibbering (UvA) and Evert Jan Baerends (VU) in 1993, he worked with Paul von Ragué Schleyer (Erlangen), Tom Ziegler (Calgary), and Roald Hoffmann (Cornell), became assistant professor in Marburg in 1997, and obtained tenure at VU Amsterdam in 1999.

Matthias Bickelhaupt received various prizes and honors, among others, the Dutch Research Council’s VICI award, member of the Royal Holland Society for Sciences and Humanities, and Chemistry Europe Fellow. He is known for his work on developing the analysis and theory of chemical bonding and reactivity, with applications in organic, inorganic, and biological chemistry.

In my talk, I will address two recent findings that fundamentally change our understanding of chemical bonding that is also directly relevant for industrial applications, particularly for initiators in polymerization reactions. The first one concerns a well-known phenomenon in molecular structure and bonding, namely, the contraction of C–H and other bonds as the carbon atom involved varies, in s–p hybridization, along sp3 to sp2 to sp, e.g., the C–H bond in ethane, ethene, and ethyne [1]. Based on quantitative MO and the Activation Strain Model (ASM) [2], I will show that this well-known trend is not, as taught in textbooks [3], determined by an increasing amount of s-character at the carbon atom in these bonds. Instead, it turns out to be caused by a diminishing steric repulsion between substituents around the pertinent carbon atom, as the coordination number decreases from 4 to 2, along sp3 to sp2 to sp (see illustration) [1]. 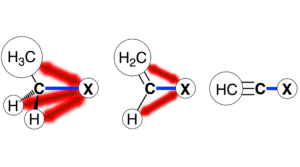 Furthermore, I will address a paradigm shift related to the observation that chemical bonds, in general, become weaker as the electronegativity difference across the bond decreases [4]. The accepted MO picture behind this trend is that the electron of the higher-energy singly-occupied molecular orbital (SOMO, e.g., on a methyl radical) is stabilized less if it drops less in energy into the bonding combination with the lower-energy SOMO (e.g., the p AO on a halogen atom), if that latter SOMO goes up in energy (e.g., from C–F to C–I bond). For the first time, the actual bonding mechanism in representative series of bonds has been fully elucidated using quantitative MO theory. Strikingly, our findings reveal how, and why, the above electronegativity model for the strength of polar bonds breaks down for specific series (e.g., C–F to C–I), whereas it does hold for others (e.g., C–C to C–F). Ironically, the series of carbon–halogen bonds, for which the electronegativity model breaks down, serves in major textbooks to illustrate the correctness of this model [3].
If time permits, I will round off with a novel insight on the question of whether a cycloaddition reaction proceeds concerted synchronous or asynchronous.

This lecture is for ARC CBBC community members only.