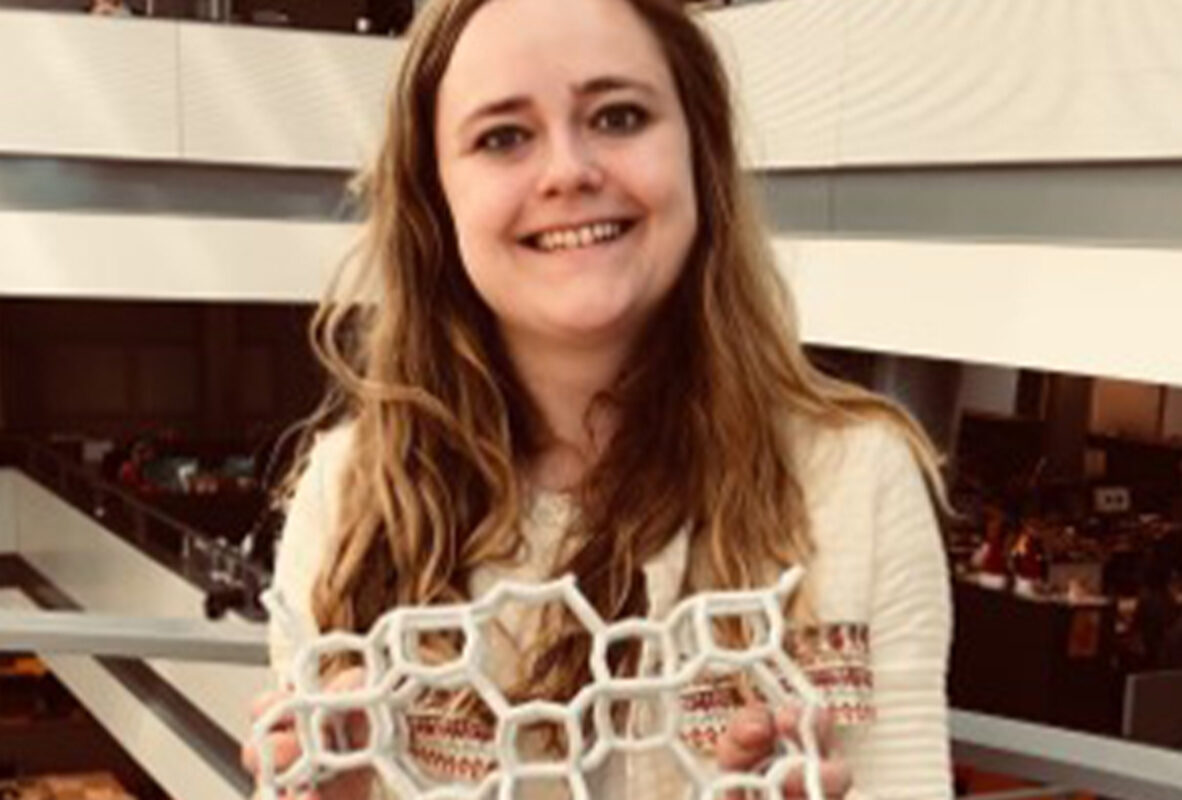 Methanol is a molecule which can be obtained from numerous sustainable sources like waste, biomass and CO2. In her research Sophie van Vreeswijk from Utrecht University is focusing on catalytic reactions, more specifically on the conversion of this methanol to more value adding products which in their turn can be used as feedstock for plastics and fuels.

The main challenge in this conversion process is the formation of very large hydrocarbon molecules as byproducts (called coke), which deactivate the catalysts.

In her research, she want to understand where coke forms in the catalyst and how to prevent its formation, using a special technique to look at the catalyst in 3D at the atomic level.

Sophie hopes that with her research she can be a link in the chain to discover future sustainable processes and greener environment solutions.

For the conversion of small molecules, catalysts can be used. In Sophie’s research these are zeolites, materials with a well defined porous structure.

She has recently published about her research

The methanol-to-hydrocarbons (MTH) process, commonly catalyzed by zeolites, is of great commercial interest and therefore widely studied both in industry and academia. However, zeolite-based catalyst materials are notoriously hard to study at the nano-scale. Atom probe tomography (APT) is uniquely positioned among the suite of characterization techniques, as it can provide 3D chemical information with sub-nm resolution. In this work, we have used APT to study the nano-scale coking behavior of zeolite SSZ-13 and its relation to bulk coke formation on the macro-/micro-scale studied with operando and in situ UV-vis spectroscopy and microscopy. Radial distribution function analysis (RDF) of the APT data revealed short carbon–carbon length scale affinities, consistent with the formation of larger aromatic molecules (coke species). Using nearest neighbor distribution (NND) analysis, an increase in the homogeneity of carbon was found with increasing time-on-stream. However, carbon clusters could not be isolated due to spatial noise and limited clustering. Therefore, it was found that the coke formation in zeolite SSZ-13 (CHA) is reasonably homogeneous on the nano-scale, and is rather similar to the silicoaluminophosphate analogue SAPO-34 (CHA) but different in nano-scale coking behavior compared to previously studied zeolite ZSM-5 (MFI).