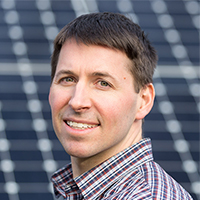 Garnett obtained his PhD from the University of California Berkeley (US) in 2009, followed by a postdoctoral fellowship at Stanford University. In 2012, he joined AMOLF to launch the Nanoscale Solar Cells group. In 2018, he also became Professor by special appointment at the University of Amsterdam. As part of CBBC, he will explore using light as a reagent in chemical reactions to selectively activate different chemical bonds via controlled surface plasmon resonances.

Read more about Erik Garnett on the website of AMOLF.