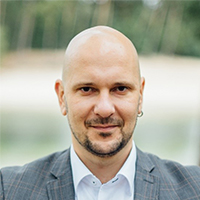 Evgeny Pidko (Moscow, Russia, 1982) received his PhD from Eindhoven University of Technology in 2008, where in 2011-2017 he was an Assistant Professor of Catalysis for Sustainability. In 2016 he became a part-time professor of theoretical chemistry at ITMO University, St. Petersburg. Since September 2017, he is an Associate Professor and head of the Inorganic Systems Engineering group at the Chemical Engineering Department of Delft University of Technology.

Evgeny Pidko serves as a member of the advisory boards of the journals ChemCatChem and Catalysis Science & Technology. He is an author of over 160 publications on various topics related to computational, physical, inorganic, supramolecular chemistry, catalysis and chemical engineering. In his research, Pidko successfully combines experiments and theory to understand molecular mechanisms underlying the behavior of various chemical systems ranging from heterogeneous and homogeneous catalysis to inorganic functional materials. He uses these fundamental insights to guide the development of new more sustainable and efficient chemical technologies.

Read more about Evgeny Pidko on the website of Delft University of Technology.